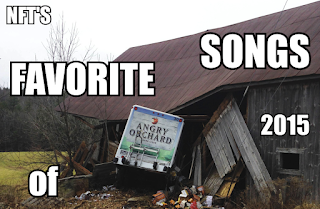 Music is dead. Smash all your Apple products and invest in a dope dirt bike or speed boat.

Back from hiatus because I love lists and I can't resist talking about my favorite things of the year. So, to get the boulder that is list season rolling, here are some of my favorite cover songs of 2015!

If you are like me, then you probably only know Hot Chip from the wacky music video for their 2010 single, "I Feel Better". Well, now I also know that they also do a pretty nerdy synthed-up version of "Dancing in the Dark" by Bruce Springsteen. This cover of one of my favorite Boss jams includes an Everything is Terrible-esque music video and a sprinkling of LCD Soundsystem's "All My Friends" towards the end. A lot of this cover plus the music video seems overplayed at times but I still enjoy it for what it is; tacky.

Tigers Jaw - In Between Days/Kevin Devine - Lovesong from Devinyl Splits No. 3

Girlpool - Cut Your Bangs from Chinatown

Somebody Kill Me Please - LVL UP from Faux Real II

Faux Real is a compilation of cover songs curated by Father/Daughter Records. The covers are that of fictional bands and singers from TV/films such as The Rutles, Sadgasm from the Simpsons, and The Blowholes from The Adventures of Pete and Pete. My favorite one of the batch this year comes from LVL UP and their rendition of "Somebody Kill Me" via the Wedding Singer. The original sung by Adam Sandler's character had been listening to a lot of The Cure at the time.

Another cover from pop culture. Didn't listen to a lot of Sorority Noise this year and I wished I watched more Rick and Morty. Smash this link to listen to the original.

Thou - Even in His Youth from Whatever Nevermind

Another year, another Nirvana tribute album. Out of this year's covers of Nevermind curated by Robotic Empire, I had to narrow it down to the bonus tracks by Thou, especially "Even in His Youth", as my favorites of the pack.

Went with because even with Thou's own signature mutilation, there is still some poppiness that bleeds out from time to time. Well, maybe not "pop" per se, but it does have a little groove to it for a Thou track.

Spazzin' to the Oldies - A Tribute to Spazz

Probably my favorite tribute album this year, Spazzin' to the Oldies is a 26 song nail gun full of grindcore nails to the face. This is a tribute album for the one and only Spazz. Spazzin' to the Oldies features some damn good grindcore/powerviolence/spastic metal acts from today such as Purge, Godhole, God's America, Brainshit, Chinsniffer and OSK (to name a few that I recognize). If I had to pick a favorite here, I would have to go with OSK's cover of "Spazz vs. Mother Nature" because it includes the banjo outre (no mouth harp, though, but I'll still give credit where it's due).

Old Witch's interpretation of CocoRosie's macabre tale, "Gallows" is definitely my favorite kind of cover song. While there were plenty of true-to-the-original covers I heard this year on and off the internet, I always love a good rework of a song from a different genre or a song given new life. Isn't the whole point of a cover putting your own spin on someone else's work? Isn't playing a song exactly the way it was intended Karaoke?

I'm starting to digress here for a sec but I honestly wish I could list Weekend Nacho's cover of "Tired of Sex" by Weezer. Yes, Weekend Nachos covered Weezer this year. No, it was not the most violent retelling of Pinkerton's #1 hit known to mankind. Instead it was strictly "Tired of Sex" performed as Weekend Nachos playing Weezer. Well hey, there's also "In the Garage", maybe they were just joking around and this is the Weekend Nachos cover I was expecting. Nope. Whistling and all, it's a great cover, but it's no Weekend Nachos cover. Then again, maybe my opinion will change once I get a grip. Maybe I'm just mad they didn't cover "El Scorcho".

Screaming Females covering T. Swift's "Shake it Off" for the AV Club
Ironlung with Wizard of Ozz covering B. Sabbath's "Electric Funeral"
Leftover Crack covering B. Raum's "Left Legs"
Corrective Measure covering A. Front's "Discriminate Me" (gotta rep Maine Hardcore)
Holy Filth covering M. Otorhead's "Iron Fist" (gotta rep Maine Metal)
And a thanks to any bands that I saw this year cover stuff... a heard a lot of it and it was pretty good most of the time.


Also, I'm sure I missed something very dope.
Posted by Newkeith at 8:40 PM No comments: