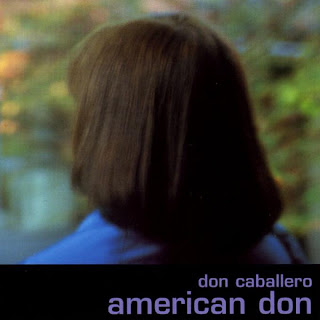 American Don is Don Cab's final album before Ian Williams split. Williams is now making the big bucks in experimentally prog and radio friendly "math rock" band Battles. Maybe I'm bitter in saying that since they found themselves small fame but come on, Battles did lend their music out to one of the Twilight flicks... and just recently to some video game of some sport they play in England called soccer.

Williams may have traded his hip points in but his talent should not be overlooked. This guy can play the guitar like no one's business! Twinkling and tapping and all that fun stuff. American Don and the rest of Williams efforts with drum master and possibly prick Damon Che is very enjoyable not just for math rock fans but any enthusiast of jazz or music theory.

American Don was recorded by Steve Albini (Big Black/Shellac/Rapeman) and released on Touch and Go Records.

After American Don and the departure of Ian Williams, Don Cab was signed to Relapse and picked up a heavier sound like that of  fellow label mates of the time, Dysrhythmia. Damon Che continued with Don Caballero as the only constant member.

I always thought Don Caballero were one of those instrumental bands that had too much time on there hands since they didn't have to write any lyrics (with the exception of Punkgasm) and got to focus all their free time on really obscure song titles instead. "Fire Back About Your New Baby's Sex", "Details on How to Get ICEMAN on Your License Plate", "A Lot of People Tell Me I Have a Fake British Accent", and "Let's Face It Pal, You Didn't Need That Eye Surgery" are just a few examples from American Don. They're like those inside jokes that you'll never get because 'you just had to have been there I guess'.