NFT's Got You Covered! With Bomb the Music Industry! 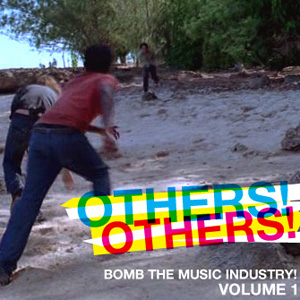 Others! Others! by BtMI! is a grab bag of goodies that Jeff Rosenstock and the gang have created for and as 7 inches, unofficial releases, original versions, demos and other rarities. The concept of this "Others! Others!" project was originally going to be as a release of covers from every band BtMI! has toured with. They scrapped this idea due to the fact that it would get pretty annoying for the other bands. I don't know why they would get annoyed. I wouldn't be annoyed in the least bit. I'm not everybody though and therefore this collection of extras is not full of covers.

The release still features five solid covers of bands BtMI! may or may not have toured with. "This Graceless Planet" (We Versus the Shark), "4 Inches" (Rick Johnson Rock and Roll Machine), "If Assholes Got Awards, I'd Have a Trophy Case" (Infamous Jake and the Pinstripe Mafia), "Little Brother" (Andrew Jackson Jihad), and "Gold Soundz" (Pavement) are the covers amongst the other goodies featured on Others! Others! Vol. 1.

Even though Bomb the Music Industry! has a bit of a ska influence and many things become driven my the off-beats; the covers, demos, original versions and bonus tracks are still supreme. BtMI! even takes the two ska bands Rick Johnson Rock and Roll Machine and Infamous Jake and the Pinstripe Mafia's (who aren't super terrible ska bands) tracks and makes them even less ska. Just because these guys are tagged as ska, doesn't mean they torment you with fedoras and jazz history (damn, that brings terrible images of my past to mind) . BtMI! are still looking out for the common good of punk music and are above all that bullshit that mainstream ska bands stand for. What do they stand for? Being lame, of course.

It's also really cool to see We Versus the Sharks on the other end of the covering process. It's pretty cool to see that these cover posts have gone full circle as well; We Versus the Shark and their cover album were the first band featured on NFT's Got You Covered and now they are the ones getting covered. With Bomb the Music Industry!'s whack at "This Graceless Planet", we see what was once a spastic but controlled math punk anthem becomes a spastic out of control vomiting computer made up of electronic keyboards and percussion instruments. The cover is actually really well done despite none of it sounding like live instruments and the difficulty of the piece. Bomb the Music Industry! are no strangers to crazy meters and looping in their own work either.

Other key elements and cool features of Others! Others! Vol. 1 has to be the demo version of "All Alone in My Big Empty Apartment", a track that was later released on Goodbye Cool World, this time with ukulele (I think that's a ukulele) instead of acoustic guitar. I personally like the demo version better and so does Jeff. Gosh, I'm slowly beginning to hate the ukulele (especially electric uke), but I will always love whistling and luckily for me, both versions of "All Alone in My Big Empty Apartment" still have the whistling, which is nice. The track "D13 4 YR GOV3RNM3NT" is a "megamix" for Anti-Flag. BtMI! made it for them to come out to as an introduction song while the two bands were on a little three day tour together. According to jeff after a short and funny story later, it never got played for them. Lastly, the track "This Year For President's Day, I'm Giving Up on Rock and Roll" sounds a lot like a Christmas song, well that's because it was going to a Christmas song. The track was for BtMI!'s split with Rick Johnson Rock and Roll Machine along with their cover of his track, "4 Inches". The split was scheduled to be released around Christmas time but it took too long and ended up getting released a few days after President's Day. So, they just changed "This Year For Christmas" to "This Year For President's Day". On the same BtMI!/Rick Johnson split, Rick Johnson Rock and Roll Machine cover BtMI!'s track, "Funcoland Vs. the Southern Electorate" off their first album, Album Minus Band (2005) (which also features a cover).

Most of my knowledge about this collection is from Quote Unquote (the first ever donation based record label) where Bomb the Music Industry! and other rad bands post their music (for free!) and sometimes write cool stuff. In the case of Other! Other! Vol. 1 on Quote Unquote, there is every song listed with the lyrics and some sweet stories and notes from Jeff himself (I'm guessing)!  Quote Unquote is an awesome site like If You Make It and everyone should check out all the cool stuff they have to offer! Now!

Bomb the Music Industry also released a new album last year called Vacation. It's pretty chill. Check that out too!