Man, I've been listening to this album all day and all I can think about is: how could I have forgotten how cool it was when I first heard shit a few years back? I was just going to throw it on to the Monday post this week but I figured that I could just write about it now instead of waiting a couple of days. Plus, I probably won't keep forgetting about it if it's right out here in the open and all. 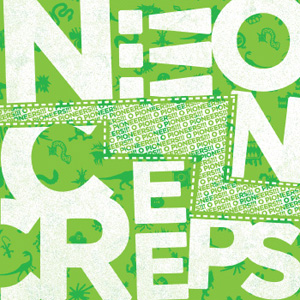 O Pioneers!!! played their instruments loud and sang like they had to get a few things off their chest. Their sound could always seem to be connected to the oldies like Against Me!, Hot Water Music and (insert another band like Leatherface or The Broadways here), and while I'm usually a stickler about just comparing another band to something else instead of saying what they themselves sound like, I would have to agree with these comparisons. Do I have a problem with this? Nah, it's chill. All these bands had it going on and brought something really honest and emotional to the punk game. O Pioneers!!! just stayed true until the very end, unlike most of those other bands. True to their sound at least.

Neon Creeps has a lot of awesome things and sounds going for it despite almost everybody quitting on frontman Eric Solomon (including Chris Ryan who is the Chris Ryan from the song title, "Chris Ryan Added Me on Facebook") and initially becoming the last full length we would hear from them.

My favorite tracks would have to be: "Stressing the Fuck Out", "Cool Kid City", and "Saved By the Bell was a Super Good Show", you know, because it was! All the other tracks are super good too! Don't worry!!

O Pioneers!!! has since called it quits on existing but pretty much their whole discography is archived and free for everyone to enjoy.

Similar sounds/acts: Against Me!, Hot Water Music, Kudrow, Bomb the Music Industry!, Hard Girls, The Hold Steady if they went orgcore, Off With Their Heads and more Asian Man Records label mates.

Discography
Asian Man Records
Last.fm
Posted by Newkeith at 10:57 AM